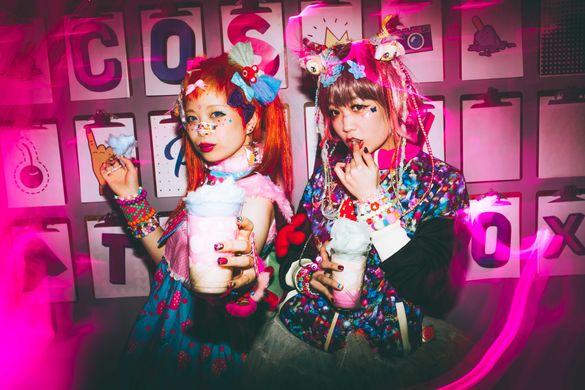 Tokyo, Japan – February 6, 2018 – Provocative, confident and cheeky – Marriott International's bold experiential brand, Moxy Hotels, created the ultimate 'playhouse' at the Moxy Tokyo Kinshicho to celebrate the debut of the brand in Japan. Inspired by subcultures of play in Tokyo, the party showcased the costume, gaming and underground music culture that are the iconic lifeblood of the city.  Attended by more than 350 guests, the opening party saw the likes of Japanese TV personality Maggy and celebrity DJs Kaori, Yuka Mizuhara and Alissa Ueno.

Situated at the intersection of two cultural currents – steadfast tradition and ever influential trend-setting – Tokyo represents the best of both. Despite perceptions of conformity, Japan is also famous for the influence of its subcultures, mixing punk with petticoats, the dramatic with the demure, action heroes with “kawaii” (cuteness).

In line with Moxy's cheeky and spirited attitude, the Moxy Playhouse offered guests different styles of play, from games and art to music and fashion. Each zone explored a different Japanese subculture, inviting guests to Play On.

The second floor was all about celebrating the gaming culture of Japan. Through décor and graphics, Moxy staged a perfectly Instagrammable scene inspired by nineties gaming culture, making the virtual worlds created by gaming a reality for one night. By bringing in authentic arcade games including Pac Man, Super Mario Land and Space Invaders, attendees were able to truly get into the gamer's spirit.

The most eccentric floor in the Moxy Playhouse celebrated Tokyo's colorful “cosplay” (costume play) culture. Inspired by Japanese fashion icons Gyarus, Lolita, and Decora.  Attendees were invited to “play” whoever they wanted to be along with rebel and cosplay participants. For those looking to explore their more rebellious side the hotel's basement was transformed into a den of self-expression with air-brush tattoos inspired by the anti-establishment subcultures that bred the Sukeban, Dekochari and Dekotora trends.

The night ended on a high with DJ Kaori, also known as Japan's queen of hip hop, spinning her signature beats that continued to electrify the night away. She also debuted two unreleased tracks with Beverly from their soon to be released albums.

The 205-room Moxy Tokyo Kinshicho hotel is located in the urban Kinshicho district, edgy yet close to some of the city's coolest districts of Shinjuku, Shibuya and Ginza, making exploring the city easy. Located near the Honmachi station in Osaka, Moxy Osaka Honmachi features 155-rooms and is a perfect playground for modern urban explorers in Osaka.

Moxy Hotels is Marriott International's new millennial-focused brand that debuted in September 2014 with the opening of the Moxy Milan. A boutique-hotel concept for the next-Gen traveler, Moxy is a fresh and innovative brand combining stylish design and approachable service at an affordable price point. With tech-enabled bedrooms, vibrant lobby spaces and warm, modern service, Moxy aims to surprise travelers with a thoughtful, spirited and fun guest experience. Moxy Hotels is proud to participate in the industry's award-winning loyalty program, Marriott Rewards® which includes The Ritz-Carlton Rewards®. Members can now link accounts with Starwood Preferred Guest® at members.marriott.com for instant elite status matching and unlimited points transfer. To learn more about Moxy Hotels, visit www.MoxyHotels.com.

Marriott International, Inc. (NASDAQ: MAR) is based in Bethesda, Maryland, USA, and encompasses a portfolio of more than 6,500 properties in 30 leading hotel brands spanning 127 countries and territories. Marriott operates and franchises hotels and licenses vacation ownership resorts all around the world. The company also operates award-winning loyalty programs: Marriott Rewards®, which includes The Ritz-Carlton Rewards®, and Starwood Preferred Guest®. For more information, please visit our website at www.marriott.com, and for the latest company news, visit www.marriottnewscenter.com. In addition, connect with us on Facebook and @MarriottIntl on Twitter and Instagram.