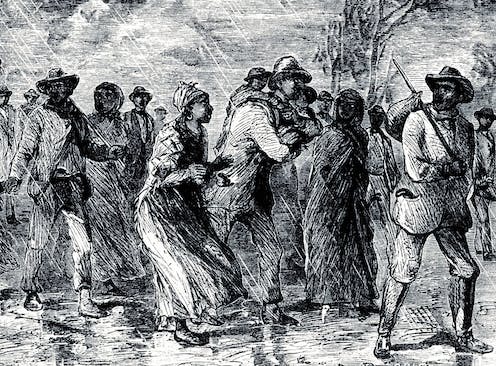 For generations, the Underground Railroad[1] has been the quintessential story of resistance against oppression.

Yet, the story is incomplete.

What is far less known is that the majority of enslaved people who fled Southern slavery before the 1863 Emancipation Proclamation[2] never crossed the Mason-Dixon line[3] to freedom in the Northern states.

Instead, they remained within the slaveholding Southern states.

As a scholar[4] of slavery, labor and resistance, I have written about the thousands of enslaved Black people who gravitated to the burgeoning cities and towns of the South, where they lived camouflaged among urban Black residents in Baltimore; Charleston, South Carolina; New Orleans; and Richmond, Virginia.

In my book[5] “Escape to the City: Fugitive Slaves in the Antebellum Urban South,” my research reveals that the resistance of Black people in the antebellum South was much larger and much more active than we have thought.

A natural part of Southern cities

Despite their numbers, this parallel story to the Underground Railroad did not leave a mark that is very discernible today.

Unlike fugitives who fled to the North – or to Mexico – those who stayed in the South did not cause political debates that historians can analyze.

And newspaper coverage was so meager that, for the most part, generations of historians have simply overlooked the fact that thousands of runaway slaves went to Southern cities. They overwhelmingly came from nearby plantations and towns.

Intriguingly, it is exactly this gap in the historical record which suggests that urban fugitives prevailed, because it testifies to their virtual invisibility.

My research has found snippets and snapshots of information about them.

Autobiographies, such as the ones by James Matthews[6] and George Teamoh[7], reveal how they procured work in a new place.

When Matthews went to Charleston, he wrote that he “went down to the stevedore’s stand and waited there with the rest of the hands” until he was recruited for “stowing away cotton in a vessel.”

Likewise, Teamoh wrote that he “found employment during a few days” at the dockyard at the Richmond Basin.

South Carolina slaveholders complained in petitions[8] that their runaways were hired in Charleston to load vessels. Jail ledgers give insight into those who were caught.

For contemporary residents, escaped slaves in Southern cities were a normal occurrence, as the routine handling of them suggests.

When the New Orleans Daily Picayune in 1852 reported that runaway slaves “were hustled up by the police last evening,” it concluded that none of the cases “were of sufficient interest to be worth narrating.”

Some refugees from slavery were apprehended, but as I learned during my research, most could live and work unmolested by police, co-workers or neighbors.

They could be the washerwoman or the neighbor’s cleaning girl or the bricklayer in the street – all hidden in plain sight.

When the Black populations in Southern cities grew throughout the antebellum era between 1800 and 1860, individual family members, friends and sympathizers offered support to Black fugitives to help find housing and work.

As a whole, Black society functioned as a community in which fugitives could remain invisible to slaveholders, police and authorities.

Harboring or aiding an enslaved Black fugitive had been a punishable offense long before the Fugitive Slave Act of 1850[9], which enabled anyone to capture and return any Black man or woman, often regardless of legal status, to slavery. If caught involved in an enslaved person’s escape, helpers could face as many as seven years in prison.

A reward poster for a runaway enslaved person that circulated in Ripley County, Missouri, in March 1860. Bettmann/GettyImages[10]

But shared social and political experiences bound people of African descent together. In contrast to Colonial times, it is well known that during the antebellum era, Black families often counted both free and enslaved members.

This mobilized a broad intraracial solidarity that furnished fugitives with the right environment to carve out new lives outside the reach of their masters and mistresses. My research[11] shows that men and women took the opportunity to find jobs, tie new friendships and join local churches.

The need to be invisible

Very clearly, fugitives in Southern cities could only make it with the help of others.

And while flight to the North by no means meant that safety was guaranteed, success in the South depended more than anywhere else on the silence of everyone involved, as my book shows.

Tens of thousands of men and women in the antebellum years defied slavery by running away, thereby sending an explicit message of their refusal to accept exploitation and oppression.

Yet in Southern cities, there was no one like Frederick Douglass[12], who used his writing and orating skills to fight for abolition, and no one like William Still[13], who compiled records on the 649 people he helped gain freedom.

Harriet Tubman, far left, poses with her family, friends and neighbors near her barn in Auburn, N.Y. Bettmann/Getty Images[14]

Nor was there a counterpart to Harriet Tubman[15], whose leadership qualities and survival skills earned her the nickname “Moses” because of her work on the Underground Railroad[16]. Between 1850 and 1860, she successfully rescued nearly 70 friends and family members, all of whom had been enslaved.

For those who remained in slaveholding states, publicity would have been way too risky, in large part because the law was in the hands of the largest slaveholders, who controlled state legislatures.

The strategy of runaways and those who aided them was not to attract attention.

Their lives depended on being invisible.

What we won’t know

While it is a story of how people defied all odds to fight against enslavement and built up new lives, the success of their strategies to seamlessly become part of a city comes at a delayed price – for historians.

The heroes in this story have no names.

And in the rare instances that they do, a name is all that’s left.

We will probably never know much about individual children, women and men who escaped slavery in Southern cities.

What we do know now is that this type of flight relied on collective resistance that permeated virtually the entire Black population – and it was done in whispers rather than shouts.