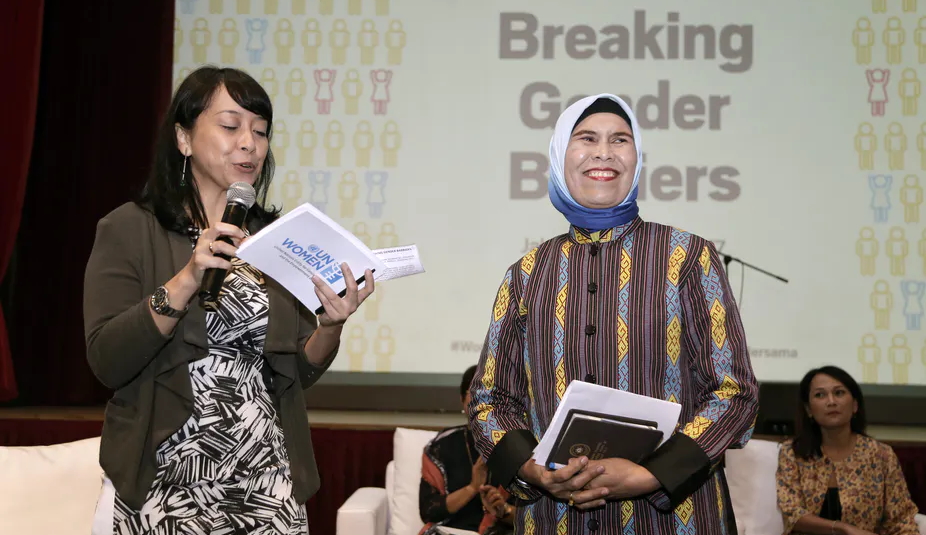 They voiced these concerns during a webinar (19/08) titled “Why is the Gender Equality and Social Inclusion (GESI) approach important in research?”. The Knowledge Sector Initiative (KSI) hosted the event.

A 2018 joint publication by the Australia-Indonesia Partnership for Gender Equality and Women Empowerment (MAMPU) and American University, US, suggested gender and minority perspectives in research and social movements contribute significantly to their empowerment in society.

“These [advocacies] will eventually increase access to essential government policies and programs for Indonesian women, especially if such advocacies are led by women themselves,” said Stewart Norup, a specialist at MAMPU.

According to data from researchers at Universitas Airlangga in Surabaya, East Java, however, only 7% of the total research produced from 2013 until 2017 took account of gender equality and minority perspectives.

Natalia Warat is the deputy team leader of The Asia Foundation’s ‘Peduli’ initiative, which aims to improve social inclusion efforts in Indonesia. She says that, due to the lack of awareness, even research that does include gender and minority perspectives usually only considers these aspects as “add-ons” in the analysis.

“Most researchers just merely fulfil the urge to include gender perspectives, without paying attention to whether it will lead to far-reaching implications that will support the vulnerable groups or not,” she said.

The lack of awareness stems from long-existing systemic challenges faced by Indonesia’s research community. Among them are ego clashes between the country’s research sectors, and a science community that is largely influenced by patriarchal norms.

Not an ideal environment for gender research collaboration

A study by the Indonesian Institute of Sciences (LIPI) on gender mainstreaming in Indonesian research agencies found organisational values and regulations often obstructed collaborations between institutions.

Researchers often experience difficulties in incorporating gender perspectives when working with institutions that have yet to include gender equality in their values, regulations and goals.

In the end, Lidwina added, gender issues often end up not being answered through the lack of an interdisciplinary approach.

An interdisciplinary approach is important in gender studies as individuals have their own particular and unique experiences of certain issues. Research that takes into account different scientific fields will help answer the complexity of gender inequality. The problem cannot be solved through a one-size-fits-all solution.

The LIPI study further indicated a lack of women-friendly institutions in Indonesia exacerbated this lack of collaboration in gender-based research.

For instance, in 2014 more than two-thirds of the research staff in several institutions were men. These include the National Nuclear Energy Agency (70.8% male), the Agency for the Assessment and Application of Technology (86.1%), the Ministry of Energy and Mineral Resources (74.9%) and the Ministry of Public Works (84.2%).

The influence of patriarchal norms

A 2016 study from the State Islamic University (UIN) in Bandung, West Java, suggested the “textual” and “doctrinal” interpretation of religion by most Indonesians often hinders the production of research that advocates progressive topics. These may include themes such as gender equality.

Medelina Hendytio is a researcher from the Centre of Strategic and International Studies (CSIS). She says these values contribute to the belief that gender mainstreaming is mainly the responsibility of women researchers.

In the Universitas Airlangga research, only around 40% of the already low number of GESI studies conducted in Indonesia from 2013 to 2017 involved male researchers.

“In my organisation, for instance, we have conducted a lot of research with gender perspectives. However, in fact, only 20-25% of men researchers are interested in gender issues,” Medelina said.

Given these challenges, experts who attended the webinar offered two main solutions.

First, Universitas Airlangga gender professor Emy Susanti recommends that gender-sensitive research paradigms and methodologies should be widely taught in universities and the scientific community as a whole.

“It is important to set clear research questions. This means that researchers should understand [gender-sensitive research methodologies], as it will heavily affect the ways in which they retrieve and analyse gender-based data, as well as to ensure its validity and quality,” she said.

Second, Irwanto, a professor of psychology at Atma Jaya University in Jakarta, proposes a database that compiles and presents gender-based data, with KSI as the host.

KSI itself has long been involved in efforts to increase the capacity of local research institutions. Recently, they have also been active in the mainstreaming of gender equality in Indonesia’s science community.

“I would like to recommend a sort of clearing house [an institution that facilitates the exchange of certain information], so researchers who would like to use gender-based data could just refer to one database,” he said.

“Based on my experience, most of the relevant and recent information and data are scattered all over the place. I am thinking that, for this matter, KSI could work or collaborate with university libraries.”

Afrobeats Singer, Davido, Unveils the Routes of Inspiration Be...

LONDON, Oct. 21, 2020 /PRNewswire-AsiaNet/ -- - Davido gives a glimpse into his creative process behind the making of his most recent album 'A Better Time', as part of the Routes of Inspirat...

TAIPEI, TAIWAN - Media OutReach - 20 October 2020 - The faux stone coating for buildings, a green product developed and manufactured by Aberdeen, has built a solid market base in ASEAN ...

REDWOOD CITY, California, Oct. 20, 2020 /PRNewswire-AsiaNet/ -- -- With Extensive Industry Experience and Customer Success Program Expertise, Simms Will Be a Significant Asset to Planful and...

Artprice by Artmarket.com: Condition of the Street Art market ...