SHANGHAI, CHINA - Media OutReach[1] - 6 December 2019 - The DHL Global Trade Barometer (GTB)[2] indicates a further contraction in world trade for the next three months, with China recording the weakest growth outlook compared to all surveyed GTB countries. China's ocean and air imports in certain sectors[1] look set to remain strong as domestic consumption drives the economy amidst an overall decline in trade growth, according to data from the DHL Global Trade Barometer released by DHL, the world's leading logistics company. 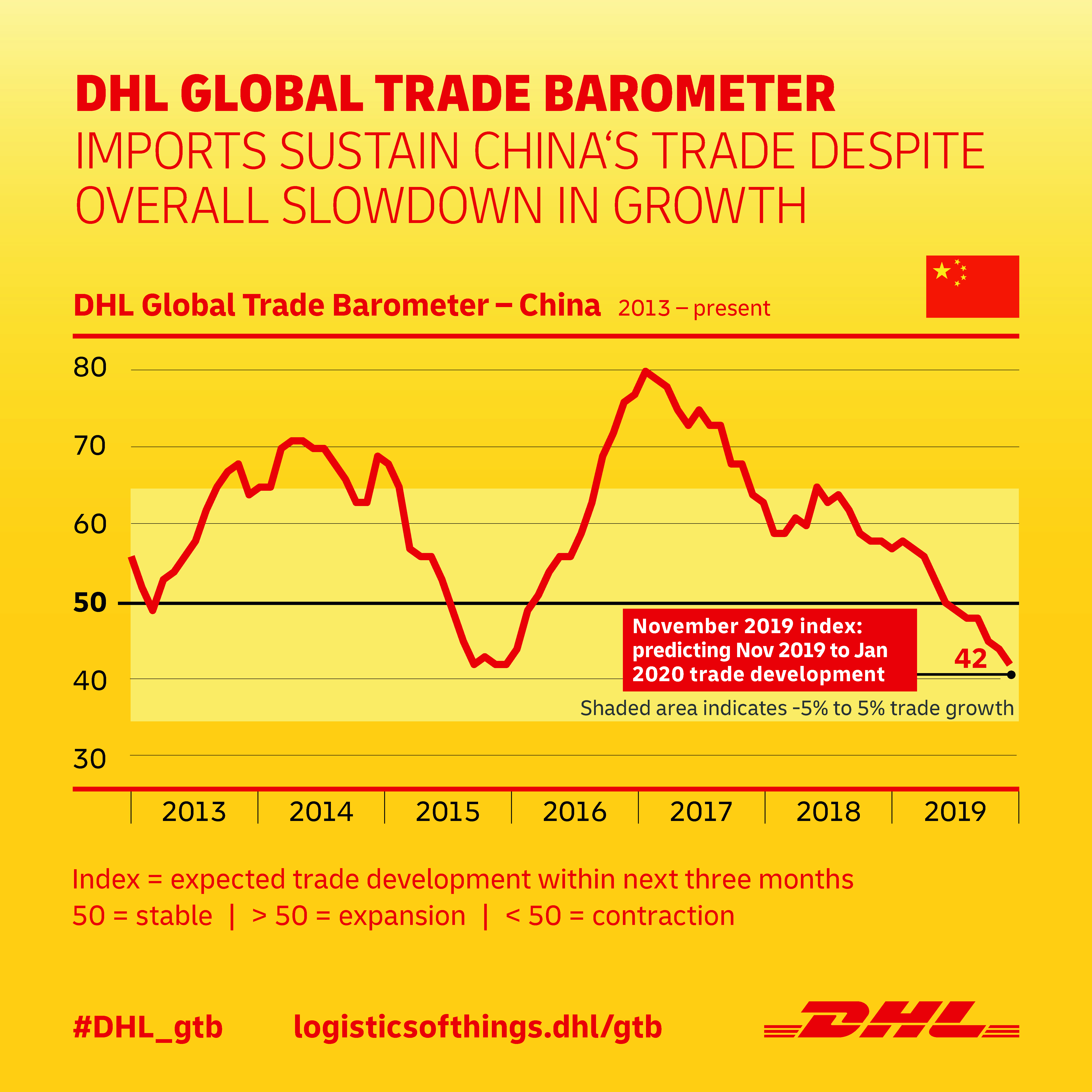 The DHL Global Trade Barometer, an early indicator of global trade developments calculated using Artificial Intelligence and Big Data, revealed that China's trade index now stands at 42 points and therefore indicates negative growth for the three months ending in January 2020. With three points down from the previous quarter it's the lowest result since the launch of the GTB in January 2018. Although China's Index value remains below 50[2] -- the threshold for net trade growth --imports for important sectors like Basic Raw Materials and Chemicals & Products via air freight and Industrial Raw Materials and Temperature or Climate Controlled Goods via ocean freight remain strong, suggesting domestic consumption is responding positively to government stimulus policy[3].

"This quarter's index indicates that China's trade growth continues to decelerate, but also points to substantial strength in domestic demand that has made up as much as 60% of China's economic growth[4] this year," said Steve Huang, CEO, DHL Global Forwarding Greater China. "Increases in air imports of raw materials and ocean exports of machinery parts should offer cause for optimism amongst major Chinese industries, coinciding with policy actions to upgrade national manufacturing capabilities[5] in preparation for Industry 4.0-related demand. With economic growth still holding at 6%[6] in Q3 2019, China's economy appears to have enjoyed significant resilience even in the face of prolonged uncertain global trading conditions."

For more information on the DHL Global Trade Barometer, please visit:  logisticsofthings.dhl/gtb[7]. The index is now also available for subscribers of the Bloomberg terminal by using the code "DHLG <GO>".

The proposed Regional Comprehensive Economic Partnership (RCEP) will boost market access to products and capital, and create the world's largest regional trading bloc that will account for more than 29.1 percent of global trade. Read more about Asia's next trade pact and its impact on global trade. [8]

[1] Click here[9] for more information on the outlook for air freight and ocean freight or the key sectors in China.

[2] In the Global Trade Barometer methodology, an index value above 50 indicates positive growth, while values below 50 indicate contraction.