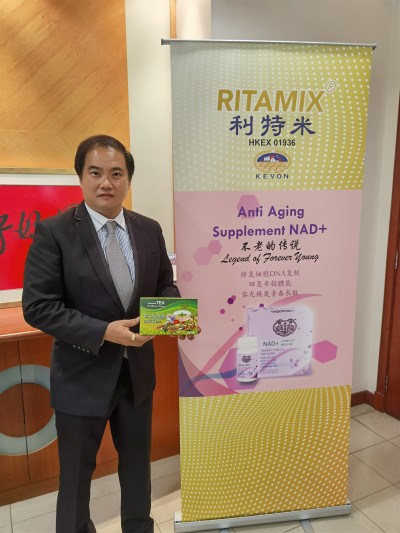 Today, most people who get COVID-19 have mild or moderate symptoms like coughing[2], a fever, and shortness of breath. But some who catch the new coronavirus[3] get severe pneumonia[4] in both lungs[5].

Ritamix has now successfully developed a modified version of a traditional herbal tea -- first of its kind in Malaysia, and for that matter, outside China -- for the benefits of our health and well-being, especially the lungs. This modified version is only 10g and less potent as compared to the traditional 210g (boiled). It is only for prevention and lung strengthening.

Ritamix Global Ltd Founder and Chief Executive Officer Dato' Sri Howard Lee Haw Yih highlighted that the Group has been working very closely with some reputable Chinese herbalists over the past few months to come up with this decoction tea.

"We found the plants that contribute amazing healing nourishment and can help restore our natural balances. The beauty of our decoction tea is that it is both gentle and powerful. It could calm and soothe cough, as well as moisten lungs and throat," he said.

According to Dato' Sri Howard, the 15-teabag decoction tea will hit the stores as early as this week, as Ritamix has identified many strong sales channel partners in the Food & Beverage (F&B) industry, fast-moving consumer goods (FMCG) sector and online dealers.

"At least 200 supermarkets have decided to sell our decoction tea. Convenience store chain operators such as KK Super Mart (under negotiation), as well as groceries stores, will also be selling our products. Once it becomes popular, we plan to penetrate further to the traditional Chinese medicine retail outlets," he said confidently.

Given the overwhelming response from these supportive sales channel partners, Dato' Sri Howard foresees that Ritamix's decoction tea will be made available in over 800 stores across Malaysia.

"Our intention is to prioritise the states that are most affected by the COVID-19. We will allocate more products to Sabah, Selangor , and Kuala Lumpur to meet their needs. To us, it's not just about making profits, but also to play a part in fighting this pandemic," he stressed.

Conservatively, Dato' Sri Howard estimated that the decoction tea should generate retail sales of about RM2.5 million (HK$5 million) in Q42020, and RM8 million (HK$15 million) to RM10 million (HK$20 million) in 2021 from January 2021 onwards. But these sales figures are expected to grow steadily as the product starts gaining traction.

"For now, we will be focusing on selling the decoction tea in Malaysia. But when the time is right, we may explore the possibility of exporting it to Australia, India and the Philippines ," he elaborated.

Meanwhile, Dato' Sri Howard revealed that Ritamix is in the midst of applying for a fast-track halal certification for its decoction tea.

"If successful, I am optimistic that our decoction tea will become very popular in Kelantan, Terengganu, and Pahang," he said.

Dato' Sri Howard pointed out that Ritamix's decoction tea is not meant to cure, but meant for strengthening the lung and may help in the prevention against negative effects to the body from smoking, virus attack, bacterial infection, flu, haze, dust, and chemical waste gas.

"The original recipe of this decoction tea is from China, and it contains ingredients whose effect is too strong, so we could not drink it every day. But with our modified recipe, consumers can now drink it on a daily basis because it does not harm your body," he said.

Dato' Sri Howard went on to say that the launch of decoction tea signifies another major move by Ritamix, which has been focusing mainly in the animal feed and food industry ingredients, to strengthen its presence in the retail human food consumer market.

Ritamix has recently announced that the Group is venturing into the lucrative 100-billion-yuan market ofNicotinamide Mononucleotide ("NMN") dietary supplement product, which also known as " The Medicine of Immortality ".

NMN is a precursor, or rather, the ingredient to make nicotinamide adenine dinucleotide (NAD+), which is a critical coenzyme found in every cell of our body, to carry out cellular processes such as glucose metabolism, energy productions, DNA repair.

It was found that when an organism ages, the level of NAD+ decreases and it slows down many biological functions. The main reason in consumption of NMN supplement, mainly marketed in capsules or powder form, is to increase the level of NAD+ in the ageing population.

Dato' Sri Howard said: "We are also going to be carrying NMN products for cats and dogs at the end of next year. Therefore, the Group will have strong expertise in the NMN and NAD+ boosters, which are crucial in contributing to cell energy and allows each of the anti-ageing properties promoted by cells with adequate ability to grow and regenerate. "

Dato' Sri Howard, who has 20 years of vast experience in the industry, reveals that the second in-house product of Ritamix, known as "Tang Yuan Tang" -- an NAD+ supplement in powder sachet form -- is expected to hit the Malaysian market in early 2021.

Subsequently, Ritamix also plans to sell its NMN products in China via the cross-border e-commerce channel.

"NMN is currently not an approved health food or general food ingredient in China and thus can only be marketed via the above channel. NMN is undoubtedly the biggest supplement product to hit China's cross-border e-commerce this year," Dato' Sri Howard added.

Dato' Sri Howard Lee says: "I believe this is an important milestone for Ritamix. Our Company has been in the animal feed ingredients and human food ingredients industry for over two decades. And now, with this NAD+ supplement, we are going to be part of the cure for this pandemic."

Without divulging the details, Dato' Sri Howard says the launch of "Tang Yuan Tang" is just a beginning of something great in the making, as Ritamix has other exciting and innovative products in the pipeline, which will make the Company a prominent player in the pharmaceutical industry amid the Covid-19 pandemic.