Enabled by the sports car manufacturer’s hallmark brand values, the virtual festival is set to catalyse and accelerate positive change

SINGAPORE - Media OutReach[1] - 30 July 2021 -Timeless design, emotional performance – these are attributes Porsche is known and loved for all over the world. But the true driving force that has propelled the brand over the last seven decades and more has always been a spirit of creativity, pushing boundaries, and shaping the future. After all, the brand was built when founder Ferry Porsche turned his dream of creating the perfect sports car into a reality. 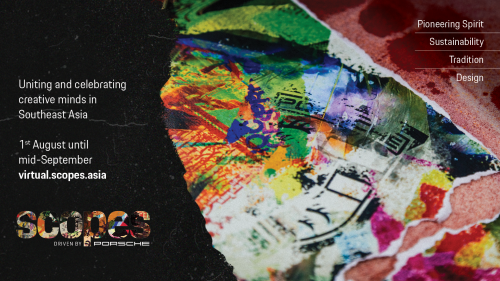 In this pioneering spirit, Porsche Asia Pacific is presenting SCOPES in Southeast Asia, to curate and provide temporary spaces for those who are driven by dreams, going beyond cultural conventions to pursue their passions and create the perspectives of tomorrow.

This will be the first virtual edition of SCOPES[2], and the festival will span over two months, hosted on an independent platform to unite a young, dynamic group of creators from Southeast Asia. From 1 August 2021, SCOPES will feature a variety of inspiring stories including documentaries, workshops, podcast series, interactive live panels and talks to encourage exchanges and dialogues on what the future in Southeast Asia could look like with visionaries and driven individuals helping to shape the narrative.

The themes that are central to SCOPES are rooted in values that make up the Porsche DNA, and are simultaneously very present in the Asian zeitgeist – a pioneering spirit in harmony with tradition, design, and sustainability. Together, these values form the foundation to create engaging and distinctive content to ignite an exchange between creative minds.

"Southeast Asia is one of the most diverse regions in the world, and it is energised by a young, dynamic group of creators, making it the ideal environment to launch the first virtual edition of 'SCOPES'. In typical Porsche spirit, we took the challenges imposed on us from the global pandemic, and turned it into a larger opportunity to tell the story of what drives our brand, and connect with a like-minded group of creative individuals through a concept that speaks to a new era, new audiences, and new forms of engagement," said Yannick Ott, Marketing Director of Porsche Asia Pacific.

The visual direction of SCOPES was defined by Theseus Chan, an internationally renowned graphic artist from Singapore, who designed and conceptualised a new logo that captures the essence of design, sustainability, and the idea of a pioneering spirit. The variety of art elements encapsulates the multi-cultural influences and the mix of modern and traditional elements in the region.

SCOPES also invited four renowned women of the arts, Narelle Kheng, Ramengvrl, Jess Connelly, and Suboi, who will share their journeys in pursuing their dreams while breaking out of cultural norms. Through an intimate portrayal of confidence, creativity, and the drive to create a better future, SCOPES will provide a platform for them to share their stories and put Asian female artists on the map, and empower other female artists with similar ambitions in the industry.

Suboi, known as Vietnam's "Queen of Hip Hop," who famously rapped with former U.S. President Barack Obama while he beatboxed, will conclude the line-up on a high note with an experimental documentary. Narrated by Suboi, the documentary will feature five chapters that are separated into distinct rooms, each taking a unique conceptual approach, exploring her multi-layered personality, or creative visions and inspirations.

Over several weeks, Green Is The New Black, Asia's first ever conscious festival and platform, will drive conversations by hosting sustainability live panel discussions with thought leaders and industry experts who are at the forefront of change in the food, fashion, and urban communities. There will also be a special preview of "The Naked Arctic Adventure", a documentary that chronicles Green Is The New Black founders, Stephanie Dickson, and Paula Miquelis, on their expedition to the Arctic Circle to witness the effects of climate change first-hand.

In a series on Wonderfruit, a popular music, art, and lifestyle festival in Thailand, SCOPES will showcase the community of driven individuals who are shaping the future with their innovations in art and architecture, food, wellness, and music. One of the films, titled "Art in The Fields: A look at art curation behind Wonderfruit," will explore the curation and collaboration with various artists to design a festival that is rooted in sustainability.

A place for creative exchange

1880, a social club born of the notion that conversations make the world a better place, will provide a junction for dialogues between passionate individuals from different walks of life. Under the theme "Driving Tomorrow", the series will share their stories told from their own lens:

As dialogue and spirit of collaboration are an essential hallmark for SCOPES, Porsche is keen to bring together even more creative minds in this region, and is calling for submissions on the platform for a chance to be featured. Creative contributors such as artists, film makers, visionary entrepreneurs or designers are invited to share their vision of, "What's Your Scope?". They can submit their projects that shape the future now linked to a pioneering spirit in harmony with tradition, sustainability, and design.

The first virtual edition of SCOPES will run from 1 August to mid-September. "SCOPES driven by Porsche" first premiered in Berlin, followed by Amsterdam and Tokyo, and will head to Warsaw after the Southeast Asian edition is completed.

Known for his iconic guerrilla, and collage approach mixed of different graphic elements and designs, Theseus' works often feature a strong range of materials and printing technology. He is also known internationally for his work for Comme De Garcons, Louis Vuitton and Gerhard Steidl. He is one of four overseas artists, along with 16 Japanese artists, selected to produce artworks for the Tokyo 2020 Olympic Games.

Sultry singer Jess Connelly makes evocative songs from the heart. Her records dabble in Pop, R&B, Hip Hop, Electronic, and other genres. Spending most of her younger years growing up in Australia, Jess has made Manila, Philippines her home since high school.

Narelle is a 27-year-old, Singapore-based singer and actress. She made her debut as part of local pop quartet The Sam Willows as their bassist and vocalist. Before her debut, she studied Theatre Studies and Drama in junior college, which has led to an acting career alongside her music one. As a solo artist, she strives to build a comfort-community of hope through her music; a safe haven to express oneself for anyone and everyone who feels lonely or lost.

Known for her infectious bars and unique, straight-to-the-point fashionable style, Ramengvrl has made her mark with edge and consistency. Winning Song of the Year titles in 2018 and 2019, she was named Indonesia's future of Rap by VICE.

Hàng Lâm Trang Anh, known by her stage name Suboi, is a Vietnamese rapper, singer, and songwriter. Raised in Saigon, where she lives, Suboi is the first Vietnamese female rapper to become successful in her country and is considered Vietnam's queen of Hip Hop.

Dr. Parag Khanna is a leading global strategy advisor, world traveller, and best-selling author. He is Founder & Managing Partner of FutureMap, a data and scenario based strategic advisory firm. Parag's newest book is MOVE: The Forces Uprooting Us (2021), which was preceded by The Future is Asian: Commerce, Conflict & Culture in the 21st Century (2019).

Lorin Winata is the founder of Melati Drinks, Asia's first non-alcoholic aperitif crafted from Indonesian wellness tonics. The 27-year-old worked previously worked in venture capital, and all the late nights spent entertaining left the health-conscious Winata searching for more nourishing alternatives. When she couldn't find them, she decided to make her own and crafted an uplifting, restorative, zero-alcohol, plant-based aperitif.

Anna Haotanto is the Managing Partner & COO of ABZD Capital and the Managing Director & CMO of Gourmet Food Holdings, an investment firm focusing on opportunities in the global F&B industry. She is also the founder (former CEO) of The New Savvy – Asia's leading financial, investments and career platform for women.

Leanne Robers is an entrepreneur, start-up advisor, community builder and public speaker. Leanne is the Co-Founder of She Loves Tech, the world's largest start-up competition and accelerator program for women-led and women-impact tech start-ups.

Stephanie Dickson is the founder of Green Is The New Black, Asia's first Conscious Festival and media platform, for people who want to live more sustainably by improving the way they think, work and consume while doing more good in the world. Her mission is to advance collective consciousness through conversations, content, and experiences, supporting people to find inspiration, gain knowledge and be able to take action to create a better lives for themselves and the planet.

HONG KONG SAR - Media OutReach - 25 November 2021 - There are many beautiful interior design can be found on the web, but they may not be suitable for everyone's house or offices...

UPL Ranked No.1 For Sustainability Performance Amongst Its Pee...

SHANGHAI, Nov. 26, 2021 /Xinhua-AsiaNet/-- Chinese and Italian Gen-Zers had a close look at each other at an online exchange activity held by China Eastern Airlines (CEA) on Nov. 24.The exch...

MELBOURNE, Australia, Nov. 26, 2021 /PRNewswire-AsiaNet/ -- Starpharma showed that 100% of evaluable patients with Stage IV prostate cancer have had efficacy responses, utilising one or more...

SHENZHEN, China, Nov. 26, 2021 /PRNewswire-AsiaNet/ The Grand Final of the 2021 PHBS-CJBS Global Pitch Competition was held on November 12 in Shenzhen, China. As one of the key events of the...