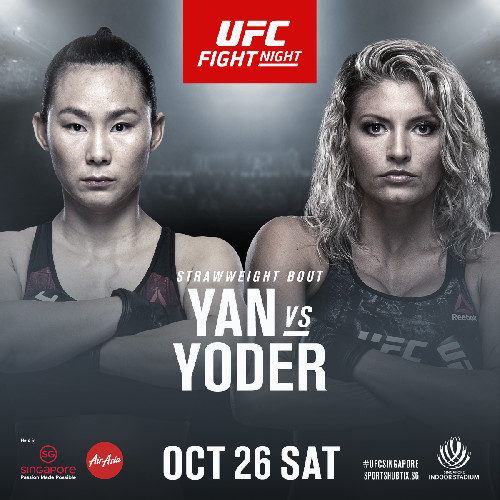 The main event features two of the most talented grapplers to ever compete in the Octagon as No. 10-ranked welterweight contender and Brazilian Jiu-Jitsu black belt Demian Maia takes on No. 11-ranked former Olympic wrestler Ben Askren. [2][3]

Yan "Fury" Xiaonan(10-1-1 NC, fighting out of Liaoning, China) is one of the first female athletes from China to enter UFC. She is a powerful striker who graduated from the famous Xi'an Physical Education University, participating in their founding MMA program. Yan is a Chinese National Games Sanda bronze medalist and Chinese National women's Muay Thai gold medalist. Yan is currently undefeated in UFC with a record of 4-0, most recently defeating veteran Angela Hill. [4]

Ashley "Spider Monkey" Yoder (7-4, fighting out of Indianapolis, Ind., USA) competed on The Ultimate Fighter Season 23 under former UFC strawweight champion Joanna Jędrzejczyk. Her UFC start in 2016 was a tough losing streak which she turned around by defeating both Amanda Cooper and Syuri Kondo. Yoder is a well-rounded competitor with high submission skills thanks to her Brazilian Jiu-Jitsu brown belt. [5]

Announced bouts on the card include:

UFC FIGHT NIGHT: MAIA vs. ASKREN on October 26 marks the second of three events in a multi-year partnership with Singapore Tourism Board and Singapore Sports Hub. The event will be live at the Singapore Indoor Stadium, prelims starting at 5pm SGT and main card scheduled at 8pm. Tickets are available at SportsHubtix.sg. [15]

Visit the UFC® Press Portal for information and content to support your UFC coverage. Please click here to apply for the event.[17][18]