TOKYO, JAPAN - Media OutReach[1] - December 10, 2019 - Air exports within the automobile, machinery and chemicals industry will offer some upside to trade growth in Japan for the three-month period ending in January 2020, even as the country's growth falls into negative territory, according to data from the DHL Global Trade Barometer released by DHL, the world's leading logistics company. 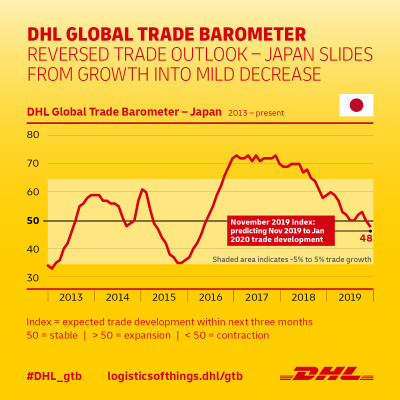 The DHL Global Trade Barometer, an early indicator of global trade developments calculated using Artificial Intelligence and Big Data, predicts that Japan's trade levels will contract in near term, with the country's index value decreasing by five points to 48 points -- below the no-growth threshold of 50 points on the Index.[1] The negative growth stems primarily from shrinking air trade across industries, though certain core sectors like automobile manufacturing are expected to remain relatively strong and offset the significant decline in other export areas.[2]

"Despite a contraction in the forecast for the next three months, Japan's trade outlook remains relatively robust thanks to the strong base provided by core industries such as automotive manufacturing, machinery and technology," said Charles Kaufmann, CEO North Asia South Pacific, DHL Global Forwarding. "Exports for Land Vehicles & Parts look set to make notable contributions to trade growth off the back of industry consolidation and greater investment[2] in electric and self-driving vehicles. We also see the upcoming Tokyo 2020 Olympic Games contributing to the bullish outlook for imports of Basic Raw Materials over the next quarter, with the Games expected to have positive impacts on the Japanese economy[3] across the board."

[1] In the Global Trade Barometer methodology, an index value above 50 indicates positive growth, while values below 50 indicate contraction.

[2] Click here[4] for more information on the outlook for air freight and ocean freight or the key sectors in Japan.

The proposed Regional Comprehensive Economic Partnership (RCEP) will boost market access to products and capital, and create the world's largest regional trading bloc that will account for more than 29.1 percent of global trade. Read more about Asia's next trade pact and its impact on global trade. [5]