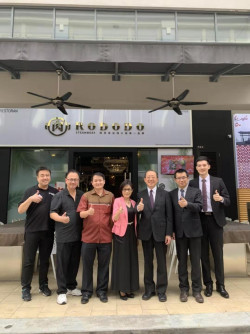 Opening of the first Rododo Hotpot/Steamboat overseas in Kuala Lumpur. Mr. David Hsu, Director of Economic Division, Taipei Economic and Cultural Office in Malaysia, and two economic secretaries, Mr. Samuel Ko and Mr. Greg Lee have been invited to sample the hotpot and provide their comments.

On November 22, 2019, Rododo Hotpot/Steamboat opened its first international restaurant in Kuala Lumpur, Malaysia, and is planning for continue expansion of new restaurants into Japan, Korea, China, Hong Kong, Macao, Singapore, US and Canada markets in the very near future.

During rapid expansion in 2018, with its 27 company operated restaurants in the market, already generated $40 million USD revenue. At present moment, its 34 company operated restaurants systemwide is expected to generated approximately $50 million USD in annual revenue. While Rododo Hotpot/Steamboat focusing on International expansion, also evaluating market such as Kuala Lumpur for acceptance of Taiwan's brand.

The first Rododo's overseas restaurant in Kuala Lumpur highlights ready-to-eat Sichuan Spicy Hotpot/Steamboat Soup base and also has an outdoor dining area to suit local dining habits, plus the brand's strong reputation for its relentless pursuit to perfection services.  As expected, Rododo Hotpot/Steamboat has immediately grabbed the local gourmets' appetites, and captured the full attention of Kuala Lumpur's traditional media, as well as social media for having highlighted as a well-known restaurant which always has a line up crowds of eager diners.

In 2020, Rododo's expansion will emphasize the broadening of the brand's market coverage.  Especially in Taiwan, they are targeting new markets for new company restaurant openings every month, while overseas expansion will estimate up to 6 new restaurants opening as an initial target.

The Xencelabs Pen Tablet: An Elevated Drawing Experience for P...

PORTLAND, Ore., March 4, 2021 /PRNewswire-AsiaNet/ -- Xencelabs, a recent newcomer to the industry, was founded by a group of experienced creative design professionals with a shared passion ...

LONDON, March 4, 2021 /PRNewswire-AsiaNet/ -- Research explores what type of online service the Japan wants to access the most and whyThe things people search for on engines like Google can ...

C2FO to Provide Support to Enterprises During Short-Term Insta...