SINGAPORE - Media OutReach[1] - 1 March 2021 - As people become more health-conscious about nutritial and medicinal properties in foods and how they are beneficial for them, one of the Superfoods rising in popularity is stingless bee honey. Known as kelulut honey in Malaysia, stingless bee honey was recognised as the first Malaysian Superfood by the Malaysian Agricultural Research and Development Institute (MARDI) in 2016. 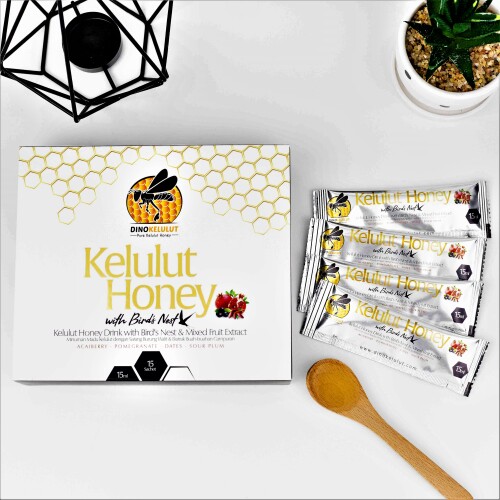 Since then, the market for this medicinal honey has been growing at 7.6% per year and is set to grow into a $3 billion USD industry by 2050.

Although demand is increasing exponentially, the supply of kelulut honey with its distinct sour-sweet flavour profile is tremendously low, since it is only available commercially in a select few countries including Malaysia.

Moving in to bridge the demand-supply gap is Dinokelulut, a Malaysian agritech startup on a mission to become one of the country's largest Superfood exporters in the near future. The company has pioneered methods of mass-producing stingless bee honey and related products in much shorter time periods.

Although that venture turned into a loss, Dino was "bitten by the bug" when he discovered how kelulut honey was beneficial to people's health, healing and immunity.

As a result, he experimented with setting up his own be farms to find innovative ways of producing this beneficial honey. After years of research and development, Dino developed a proprietary technology called 'Technohives', which utilises recyclable hives to accelerate the growth of bee colonies and stimulate honey production in a smaller space footprint.

Today, Dinokelulut has expanded from only exporting bottled stingless bee honey to producing mini packs of honey concentrates and energy drinks as well to cater to the increasing demands of its customers.

The fact that revenues have grown by 500% year-on-year is evidence that stingless bee honey is meeting a growing demand, especially exacerbated by the current global pandemic, as people seek to fortify their health and immunity against outbreaks.

There's a great buzz surrounding Dinokelulut for the near future as the company continues with its plans to deploy advanced technologies to increase their production capacity while also expanding their distribution network regionally to reach new markets that are clamouring for honey Superfoods. Seeking to secure a grant from the Malaysian government to fuel their expansion plans, Dinokelulut aims to expand into complementary industries that can also benefit from the medicinal properties of stingless bee honey, such as pharmaceuticals and cosmetics.

"We believe Dinokelulut is at the forefront in this market which is in the infancy stage and is capable of becoming a market leader in the coming years as the market matures," says founder Dino Malik.

Customers who are interested may purchase Dinokelulut honey products directly at www.dinokelulut.com/shop[2]

Belkin International Commits to be 100% Carbon Neutral by 2025

PARIS, Apr. 13, 2021/PRNewswire-AsiaNet/-- The French car manufacturer Hopium continues to imagine the future of mobility by integrating blockchain technology at the source of the developmen...

Huawei: Strive with Partners to Create New Value Together for ...

SHENZHEN, China, April 13, 2021 /PRNewswire-AsiaNet/-- Today, Huawei hosted a summit on the topic "New Value Together" as part of the Huawei Global Analyst Summit 2021. Together with more th...