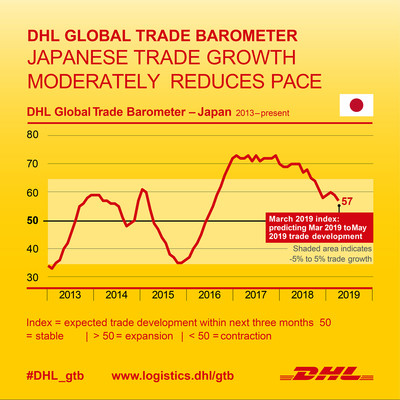 The DHL Global Trade Barometer, an early indicator of global trade developments calculated using Artificial Intelligence and Big Data, shows that Japan's trade growth is revealing a slight downward trend with an overall index of 57 points, two points below last quarter. However, the climate remains positive as the country's highest-growth sectors -- Land Vehicles & Parts as well as Capital Equipment & Machinery -- are set to drive up volumes in Japanese air exports in the coming quarter. Imports from both air and ocean shipments are also expected to bloom, especially with sectors like Consumer Fashion Goods and Personal Household Goods.

"While growth is moderately reducing in pace, Japan is still a very stable and mature economy with a balanced import-export market," said Charles Kaufmann, CEO North Asia South Pacific, DHL Global Forwarding. "This quarter's results reveal an interesting shift towards higher domestic consumption, the result of a planned sales tax hike in October to protect the country's growth momentum."[1] A slight decrease in automobile exports via ocean shipments also suggest changing consumer habits globally with regards to ride-sharing and car ownership, especially amongst the young.[2] Nevertheless, Japan's economic growth is projected to accelerate this year due to solid investment in infrastructure related to the Rugby World Cup in the later part of 2019 and the Tokyo 2020 Olympic Games,[3] evident in the robust trade of Basic and Industrial Raw Materials. In a climate typified by uncertainty in trade terms, Japan's moderate but consistent economic growth continues to signal positivity for businesses."

The Barometer's results also suggest that global trade growth looks set to slow down over the next three months, signaling only a slight growth. However, the top three nations with the highest indexes are located in Asia, namely India, Japan, and China. Indices for all seven countries that constitute the Global Trade Barometer index -- including the US, UK and Germany -- are above 50 points except for South Korea. In the Global Trade Barometer methodology, an index value above 50 indicates positive growth, while values below 50 indicate contraction.

Launched in January 2018, the DHL Global Trade Barometer is an innovative and unique early indicator for the current state and future development of global trade. It is based on large amounts of logistics data that are evaluated with the help of artificial intelligence. In order to make this valuable data accessible for academic research and to increase the macroeconomic significance of the indicator, DHL recently entered into research cooperation with Eswar S. Prasad, Professor of Trade Policy and Economics at Cornell University in Ithaca, NY, USA. The indicator is published four times a year and the next release date is scheduled for June 2019.

You can find the press release for download as well as further information on dpdhl.com/pressreleases[2]

SINGAPORE - Media OutReach - 1 March 2021 - With everyone stuck at home during the pandemic, more people are exposed to many different creative contents without any doubt. Netflix is becoming popul...

DAZN Group Announces Appointment Of Kevin Mayer As Chairman Of...

LONDON and NEW YORK, March 3, 2021 /PRNewswire-AsiaNet/ -- - John Skipper to Remain on Board of Directors and Serve as Strategic AdviserDAZN Group, the leading global sports streaming platfo...

NEW YORK and LONDON, March 3, 2021 /PRNewswire-AsiaNet/ -- LMRKTS, an industry-leading optimization and compression provider, announced today the successful completion of a proof of concept ...